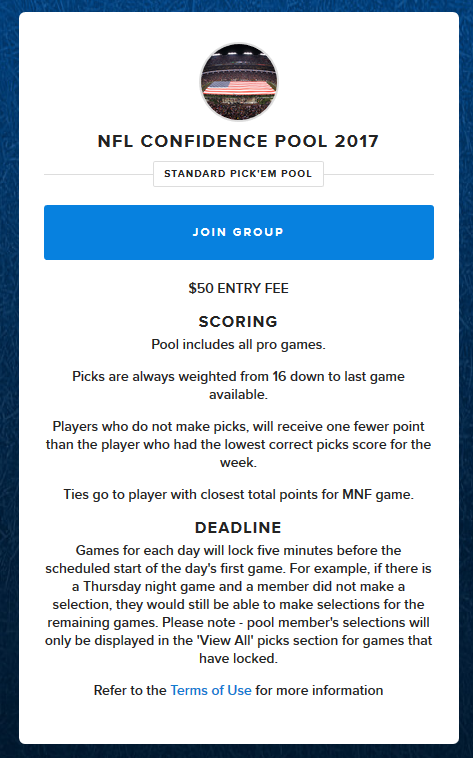 Easy to play. Just pick the winners straight up (No spreads) each week. Assign each pick a number between 1 (low confidence game) and 16 (High confidence game). Each week prizes will be paid for 1st, 2nd, and 3rd places. At the end of the season, scores are added up and season prizes will be awarded for 1st, 2nd, and 3rd places.

Entry fees: $50 per person, payable up front. Money must be received no later than Thursday, September 7th. If your payment is not received, you will be dropped from the pool.

What does my $50 pay for? The money will be dispersed as prizes during the course of the season. Approximately $2 per person per week will go to the weekly prize and approximately $18 per person will go to the overall winner of the season pool. Since we have 32 players, the math is a little different than if we had 50, so the prize payment below is what we will be using. The most important part is of the $1600 in fees collected, all $1600 is paid out over the season to the respective winners below.

All entry fees must be paid no later than Thursday, September 7, 2017.

Payments made online, via Google Wallet, Venmo or Square Cash are preferred.

Cash can be sent to:

Checks are not permitted.

If we do not have your fee by Thursday, Sept 7th prior to the start of the first game, your entry into the pool will be removed.

There will be NO refunds. If you quit before the end of the season you can sell your spot to whoever you like for whatever you can get and they will assume your points total as far as the overall standings go.

Note: Once the number of players has been determined the actual amounts for the weekly and season prizes will be determined and will be published to the website.

Picks: Pick the team you think is going to win and allocate a point value to the game. This is a straight-up pick. Point spreads are not used. Each number from 1-16 can only be used once and invalid picks will be rejected at the time of submission with a warning issued to the user. If the team you picked wins then you will score the point value that you assigned that pick. If the team you picked loses you score zero on that pick. If a tie game occurs everyone will score the value they assigned to that game. The person with the highest total score for the week wins. (Each week pays 1st, 2nd, and 3rd place)

For those that have never played this kind of pool before here’s a quick hint: Allocate 16 pts to the pick you are most confident about, 15 to next, etc. down to 1 pt. for the one you are least confident about. If 14 games are played during a week (Bye-Weeks), allocate from 16 down to 3.

Lock Out:  Games for each day will lock five minutes before the scheduled start of the day’s first game. For example, if there is a Thursday night game and a member did not make a selection, he/she would still be able to make selections for the remaining games. Please note – pool members’ selections will only be displayed in the “View All” picks section for games that have locked.